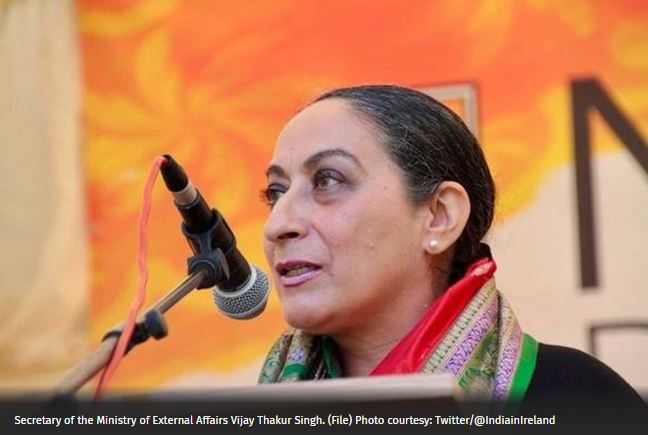 India reminded the U.N. body about its free media, vibrant civil society and institutional framework that upholds human rights in the country.

India on Tuesday declared that Pakistan was trying to polarise the UN Human Rights Council to advance its agenda in South Asia.  Speaking in response to multiple Kashmir-centric statements from Pakistan at the UN body’s 42nd Regular Session in Geneva, an Indian diplomat shed light on the contradiction between Pakistan’s attempts to champion human rights in the Union Territory of Jammu and Kashmir and the denial of the same rights to various communities within Pakistan.

“Jammu and Kashmir has been, is and shall continue to be an integral part of India. Pakistan’s nefarious designs will never succeed because the people of India are united in their determination to preserve our territorial integrity along with our core values of democracy, tolerance and unity in diversity,” said First Secretary Vimarsh Arya of the Ministry of External Affairs (MEA) in Geneva.

The Indian diplomat highlighted the discrimination faced by the minority religious communities and sects in Pakistan and stated that Islamabad has forgotten that “terrorism is the worst form of human rights abuse”. He said that Pakistan has tried to “politicise and polarise” the UN Human Rights Council by its “fabricated” narrative. He emphasised that Pakistan has stopped publishing official numbers of various religious and ethnic groups that are facing “elimination” inside that country. The hard hitting response from the Indian delegation came after the leader of the Indian diplomatic team assured the UN HRC about the situation inside Jammu and Kashmir.

India’s response at the HRC meeting came a day after the UN High Commissioner for Human Rights Michelle Bachelet in her opening remarks called upon India to end the lockdown in Kashmir that was imposed after New Delhi ended the special status for the state on August 5 when the Parliament rolled out the Jammu and Kashmir Reorganisation Act, 2019.

India reminded the UN body about its free media, vibrant civil society and institutional framework that upholds human rights in the country. The Indian official in her submission avoided naming Pakistan but pointed at cross border terrorism emanating from that country that has hurt India, saying “Those who abet, finance, and support terrorism in any form on territory under their control are in truth the worst violators of human rights.”

India also called on the UNHRC to seek global action against terrorists and state sponsors of terror groups. “We must speak out. Silence only emboldens terrorists,” said Ms Singh. India highlighted that the measures regarding Jammu and Kashmir will ensure gender justice, property rights and democratic representation.

Speaking ahead of the Indian statement, the Pakistani team led by Foreign Minister Shah Mahmood Qureshi had said that Pakistan was urging the UN body to ensure “justice and respect” for the people of Kashmir. In response, the Indian delegation said, “We should call out those who are misusing this platform for malicious political agendas under the garb of human rights.”

“One delegation has given a running a commentary with offensive rhetoric of false allegations and concocted charges against my country. The world is aware that this fabricated narrative comes from the epicentre of global terrorism, where ring leaders were sheltered for years,” said Vijay Thakur Singh obliquely referring at Mr Qureshi’s allegations.

The Indian statement also assured that the National Register of Citizens (NRC) in Assam is a “statutory, transparent and non discriminatory” process and the outcome of this judiciary supervised mechanism will conform to “Indian Law and will be consistent with India’s democratic traditions”.