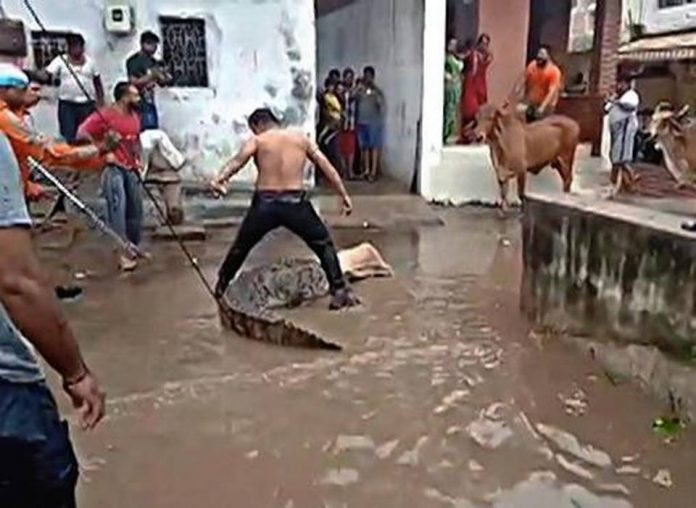 Wildlife activists rescued 50 reptiles from this Gujarat city, thanks to residents’ alerts

This monsoon season, Wildlife SOS and the Gujarat Society for Prevention of Cruelty to Animals (GSPCA) have been attending to multiple reptile emergency calls with crocodiles swimming in flooded streets and showing up in human settlements.

“This has become a common occurrence due to the recent flash floods in Vadodara and with the support from the Forest Department, we have successfully conducted 52 crocodile rescues across the city so far,” noted a release issued by Wildlife SOS.

The group added that multiple sightings of reptiles in the city have been keeping the Wildlife SOS Rapid Response Unit on their toes.

“People have been alerting the team to snakes, monitor lizards and even crocodiles across flood-hit Vadodara this year. With the water levels currently receding, such instances have escalated over the past few weeks,” the group said.

Recently, a massive 16-foot-long crocodile was rescued by the Wildlife SOS-GSPCA team and the Forest Department. The reptile became a cause for concern for occupants of Jalaramnagar slums in Karelibaug. The narrow lanes made the rescue quite challenging but after careful strategising, the team was successful in safely luring the crocodile into a trap cage. This is the largest crocodile to be rescued by the NGO in Vadodara.

Kartick Satyanarayan, co-founder and CEO of Wildlife SOS, said: “Vishwamitri river that flows through the heart of Vadodara city is home to over 200 crocodiles. During the monsoon season, the river overflows which usually leads to the migration of crocodiles to smaller ponds, surrounding human settlements. Crocodiles are met with fear and hostility leading to incidents of human conflict with this species.”

Adds Raj Bhavsar, Wildlife SOS Project coordinator and GSPCA honorary secretary: “So far, we have responded to 52 crocodile-related calls. It is heartening to see a rise in the number of people calling our helpline instead of taking matters into their own hands.”