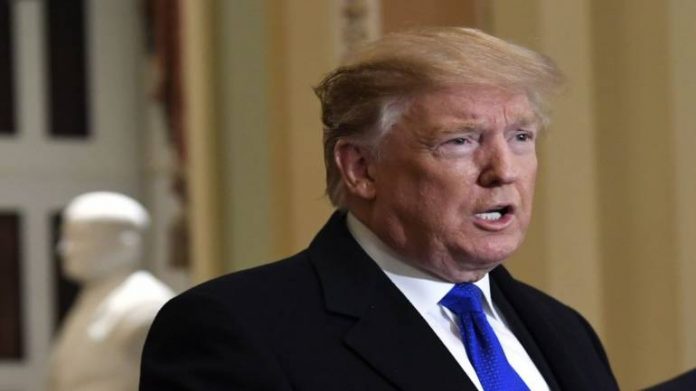 President Donald Trump escalated the trade war with China on Friday and moved further away from a deal to resolve frictions, announcing a wave of higher tariffs even as he prepared to set off for a gathering of world leaders.

In an announcement, tweeted out after major indices on Wall Street sank, Trump said existing 25% tariffs on some $250 billion in imports from China would rise to 30% come Oct. 1, the 70th anniversary of the founding of the People’s Republic of China.

Planned 10% tariffs on a further $300 billion in Chinese goods will be taxed at 15% instead of 10% starting with the first tranche on Sept. 1. The second batch of goods is due to be hit on Dec. 15.

The move was foreshadowed in an earlier series of presidential tweets that again roiled US markets concerned about the growing impact of his trade wars on a slowing global and US economy. In those tweets, Trump vowed to respond to Chinese retaliatory tariffs, accused Federal Reserve Chairman Jerome Powell of being a bigger US “enemy” than China’s Xi Jinpingand issued a call for American companies to abandon China.

Trump was responding to an announcement that Beijing was planning to impose retaliatory tariffs on $75 billion of US imports, targeting politically sensitive products from American factories to farms.

“Our great American companies are hereby ordered to immediately start looking for an alternative to China, including bringing your companies HOME and making your products in the USA,” Trump wrote.

The move came shortly before the president departed Washington for a Group of Seven summit in France at which responding to a slowing global economy — blamed by many on Trump’s trade wars — sits at the top of the agenda.

Friday’s procession of angry Trump tweets marked what analysts and people close to the administration said was a clear shift in tone by a president increasingly frustrated by both the lack of progress in his trade assault on China and a slowing economy, for which he’s eager to blame Powell and the Fed.

As he left the White House late Friday night, Trump was asked if he wanted Powell to resign. “Let me put it this way,” the president said, “if he did, I wouldn’t stop him.”

In his order for US companies to withdraw from Chin, some close to the administration saw the president embracing the calls for an economic decoupling made by the hawks inside his administration.

The evidence of the shift may have been most apparent in a 14-word tweet in which Trump appeared to call Xi an “enemy.”

“My only question is, who is our bigger enemy, Jay Powell or Chairman Xi?” he said in a Tweet posted after Powell gave a speech in Jackson Hole that contained implicit criticism of Trump’s trade policies and their impact on the US and global economies.

Trump has worked very hard ever since entering the presidency to portray his relationship with Xi as a friendship. By using the sort of inflammatory language for the Chinese leader that he has avoided in the past, Trump is likely to be noticed in Beijing.

Michael Pillsbury, a China scholar at the Hudson Institute who sometimes advises Trump, said the president’s move on Friday reflected the fact he had grown increasingly frustrated with China’s response to his escalating tariffs in recent months.

That has been driven in part by a change of attitude in Beijing, where officials seem increasingly dismissive of Trump and his chances of re-election and convinced that hawkish aides like Peter Navarro, a senior White House trade adviser, are increasingly directing policy, Pillsbury said.

“There’s a growing perceptions gap,” he said. “The China hawks in Washington have successfully encouraged their America hawks in Beijing.”

Trump’s move on Friday appeared to have been hastily assembled.

In an appearance on the Fox Business Network in the morning, Navarro played down the new tariffs announced by China. “Seventy-five billion dollars worth of tariffs in terms of, what, the combined $30 trillion economy is not something for the stock market to worry about and we’re cool here,” he said.

But just a few hours later Navarro, US trade representative Robert Lighthizer and other aides were in the Oval Office for a midday meeting to figure out the administration’s next step.

The National Retail Federation, whose membership includes Walmart Inc., issued a statement on Friday sounding the alarms about the added tariffs.

“It’s impossible for businesses to plan for the future in this type of environment,” said David French, senior vice president of government affairs for the organization. “The administration’s approach clearly isn’t working, and the answer isn’t more taxes on American businesses and consumers. Where does this end?”

The president has little legal authority to ban all American companies from doing business with China. But he has the capacity to make life difficult for them, as he has with his tariffs, and could ban some tech companies from doing business with China were he to invoke special powers and declare a national economic emergency, according to trade lawyers and analysts.

Although some White House aides have sought to portray calls in recent weeks between US and Chinese negotiators as making progress, people close to the talks and briefed on them say they have yielded little of immediate substance.

Larry Kudlow, the head of Trump’s National Economic Council, said this week that a telephone call between US and Chinese officials on Wednesday had gone well and that the goal remained a resumption of face-to-face talks in Washington in September.

Privately, however, others familiar with the discussions say that major questions remain over those talks and how willing China is to return to the substantive negotiations over structural economic reforms that broke down in May.

“The US and China can’t even agree on what text to begin the negotiations with again,” said Derek Scissors, a China expert at the American Enterprise Institute who has advised the administration.

The one thing left clear was that Friday’s escalation raised more doubts about Trump’s chosen path with China and made prospects of a deal even more distant, analysts said.

Though Trump has insisted he had little choice but to take on the fight with a China that threatens to overtake the US economically and technologically in the years to come, his critics insist he has done so in an ill-conceived and ad-hoc way that has caused more damage than necessary to the US economy.

“His approach to these negotiations all along has been, just as you are about to sit down to negotiate, you make things significantly worse for the other side and hope that they are going to give you lot of concessions just to get back to where they were,” said Philip Levy, who served as an economic adviser to President George W. Bush and is now chief economist for Flexport, a logistics company. “The Chinese don’t seem very enthused about playing this game.”