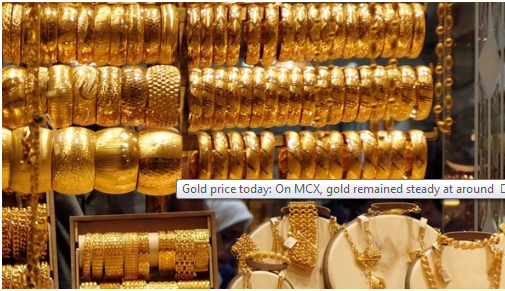 Minutes of US Federal Reserve’s July meeting, released on Wednesday, showed policymakers deeply divided over whether to cut interest rates. Some Fed members favoured a deeper cut of half a point, while some favoured no change at all. Gold investors will closely watch Fed chair Jerome Powell’s comments at the Jackson Hole symposium, scheduled for Friday. Market players are also trying to gauge ECB’s monetary policy stance amid weaker inflation and economic contraction in Germany.

“Mixed factors has kept gold in a range. Supporting price is ETF inflows which shows robust investor interest. Gold holdings with SPDR ETF – the world’s largest gold ETF – rose by 6.74 tonnes to 851.91 tonnes, highest since May 2018. However, weighing on price is stability in US equity market despite global worries and geopolitical issues,” Kotak Securities in a note.

The brokerage expects gold to continue to “trade in a broad range unless there is more clarity on trade and monetary policies of major central banks.”

“However the general bias may be on downside on relatively stable equity market and US dollar,” it added.

In India, spot gold prices surged to a new high of ₹38,820 per 10 gram on Wednesday in Delhi bullion market. But many jewellers say that the recent surge in domestic gold prices have hurt demand. Also, recent floods in states like Kerala and Karnataka may also weigh on gold sales.