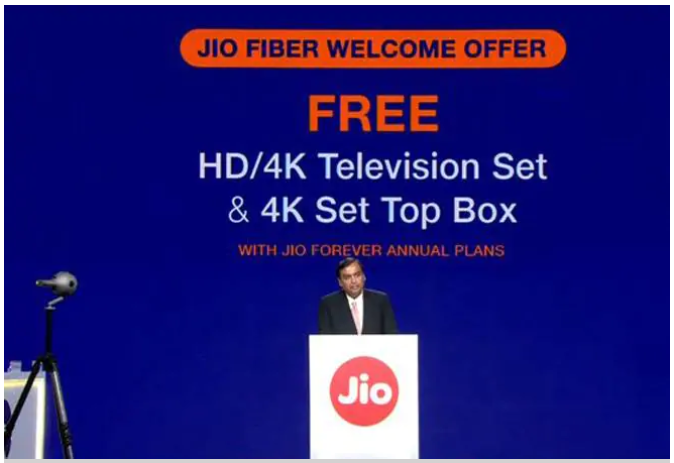 If you subscribe for the annual plan of the Jio GigaFiber, you will receive an HD or 4K LED television and a 4K set top box for free. Reliance Industries Chairman Mukesh Ambani said under the JioFiber Welcome Offer, subscribers who sign up for the Jio Forever plan will get a free set top box and TV.

“The experience of JioFiber and Jio-Set-Top-Box really comes to life when combined with an LED TV. So, JioFiber customers who opt for our annual plans, which we call Jio-Forever plans, will get an HD or 4K LED TV and a 4K Set-Top-Box absolutely free. We are calling this the JioFiber Welcome Offer,” he said during the speech. While he announced the prices of the JioFiber, Ambani did not specify how much the annual plan would cost, neither was the size of the free TV disclosed.

He asked customers to make the most of the offer and sign-up for JioFiber as soon as it is available in neighbourhoods.

Talking about JioFiber, Ambani said that the basic JioFiber plan starts with 100 Mbps speed to upto plans with 1Gbps or 1000 Mbps speed. Moreover, you will need to only pay as per your need. The plans will be priced between Rs 700 to Rs 10,000 per month to “suit every budget and every need” he said.

He also said that voice calls from home to any Indian operator – mobile or fixed – will be free. Additionally, he announced Fixed-Line International Voice Calling which will have “lowest” fixed line rates for international calling, including an unlimited international calling pack of Rs 500 per month to US and Canada.

Ambani also announced that JioFiber will come bundled with subscriptions to most leading premium OTT applications.