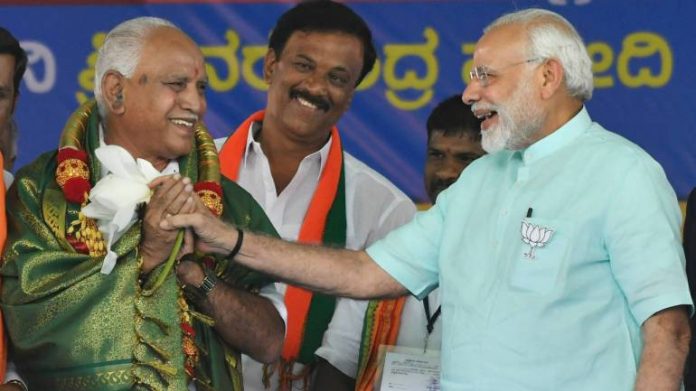 CM Yediyurappa is the only member of the state cabinet.

The delay is likely to compound the problems of the state government, facing severe criticism over lack of action on the worsening flood situation in north Karnataka. Over 237 villages across 12 districts have been impacted following unprecedented monsoon rains and the unregulated release of over 200,000 cusecs of water from the Koyna dam in Maharashtra affecting districts bordering the neighbouring state.

“It might take another two to three days,” said the first legislator, adding that the probable names of cabinet ministers are yet to be discussed.

Yediyurappa and his party colleagues, including Jagadish Shettar, Basavaraj Bommai and Govind M Karjol, have been camping in Delhi since August 5 to meet BJP president Amit Shah, but failed to get an audience. However, they met several other leaders, including Prime Minister Narendra Modi, finance minister Nirmala Sitharaman, defence minister Rajnath Singh and transport minister Nitin Gadkari.

The legislators said the delay was primarily due to the passing of several important bills, including the one revoking the special status of Jammu and Kashmir in the just concluded Parliament session, and the subsequent passing away of former external affairs minister and senior BJP leader Sushma Swaraj on August 6 night.

The Opposition, including the Congress and Janata Dal (Secular), has also been building up the pressure, citing governance failure under the new BJP government.

“Terrible floods in many parts of Karnataka. And CM is away politicking in Delhi. No minister even to attend to flood problems. 12 days since new government, BJP still hasn’t given Karnataka a cabinet,” Krishna Byre Gowda, Congress legislator and a former minister, wrote on Twitter.

Yediyurappa carried out aerial surveys of the flood-affected regions in Karnataka. He left for Belagavi district, one of the worst hit by floods, after he returned from Delhi on Wednesday.

At least five people, 18 animals and hundreds of crores worth of public and private property have been damaged across the state. A total of 25,744 people have been evacuated so far in north Karnataka, 22,682 of those are from Belagavi. Over 3,000 people were evacuated from Uttara Kannada district, the state disaster management authorities said in a statement on Wednesday.

The India Meterological Department (IMD) has in a statement on August 6 issued red alert for coastal and Malnad districts for the next five days as on 06.08.2019. Officials in the Karnataka government said Yediyurappa will leave for Belagavi district, one of the worst hit by floods, after he returns from Delhi later on Wednesday.

Though Yediyurappa does not have anyone else in his cabinet, the 76-year old leader has approved several transfers of senior officials and even stalled the approval for funds given to Bruhat Bengaluru Mahanagara Palike (BBMP, the city’s civic body).

“Funds sanctioned for BLR (Bengaluru) development including for our constituency stayed by current CM. Official Govt Orders were issued, works were surveyed and estimates were prepared through tendered agencies and even works were tendered. Now CM has instructed not to proceed,” Gowda tweeted.

“This is a setback for BLR development. Our constituency was sanctioned more than Rs 300 crore. If there is any quality issue the Govt should take stern action. Current Govt rather sanctioning more funds for BLR instead holding up what was sanctioned by previous govt,” he added.

The HD Kumaraswamy-led Congress-Janata Dal (Secular) or JD(S) coalition government stepped down last month after at least 17 legislators resigned in a crisis allegedly engineered by the BJP.