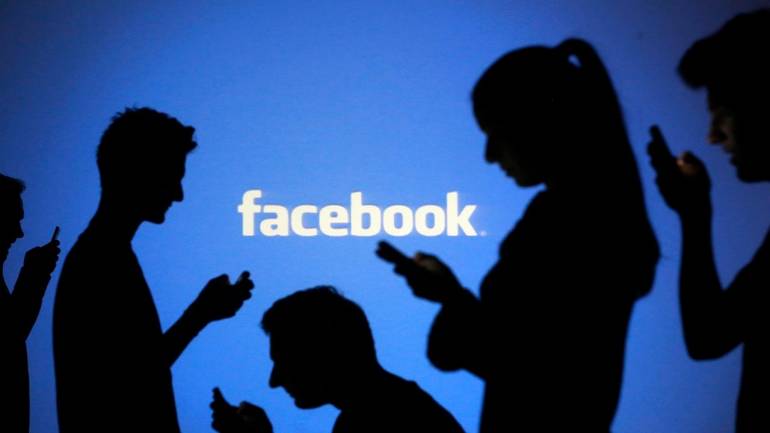 There are some big Facebook changes coming soon in 2019, with the company’s focus shifting to community and privacy.

Along with a new mission, Facebook also announced a brand new logo and a complete redesign of their web and mobile apps at F8, along with a lightning-fast Messenger app, featuring end-to-end-encryption on the mobile app and the brand new desktop app.

Here are the new features and changes coming to Facebook in 2019:

Opening his keynote speech, Mark Zuckerburg set the tone for the future — a stronger focus on privacy.

As our digital world is continuously growing and changing, “privacy gives us the freedom to be ourselves,” said Zuckerburg.

We’re in the midst of a real shift in how we interact online, explained Zuckerburg. Previously, posts were shared openly online, with the aim to reach as many people as we could in our network and reveal more about ourselves each day. But now, we need that sense of intimacy more than ever.

And with that shift in mind, the future for Facebook and its apps, including Whatsapp, Messenger, and Instagram, will have tons of improvements to their privacy settings!

This year, we can expect to see more spaces for private interactions, either in direct messages or in Facebook Groups, with stronger end-to-end encryption, so that even Facebook won’t be able to read your private messages.

Zuckerburg also spoke about our online safety. For 2019, Facebook is making sure that not only what we say is safeguarded, but there will also be work put towards reducing a post or message’s permanence. That means that we may start to see more communication streams and posts with expiry dates similar to Instagram Stories. 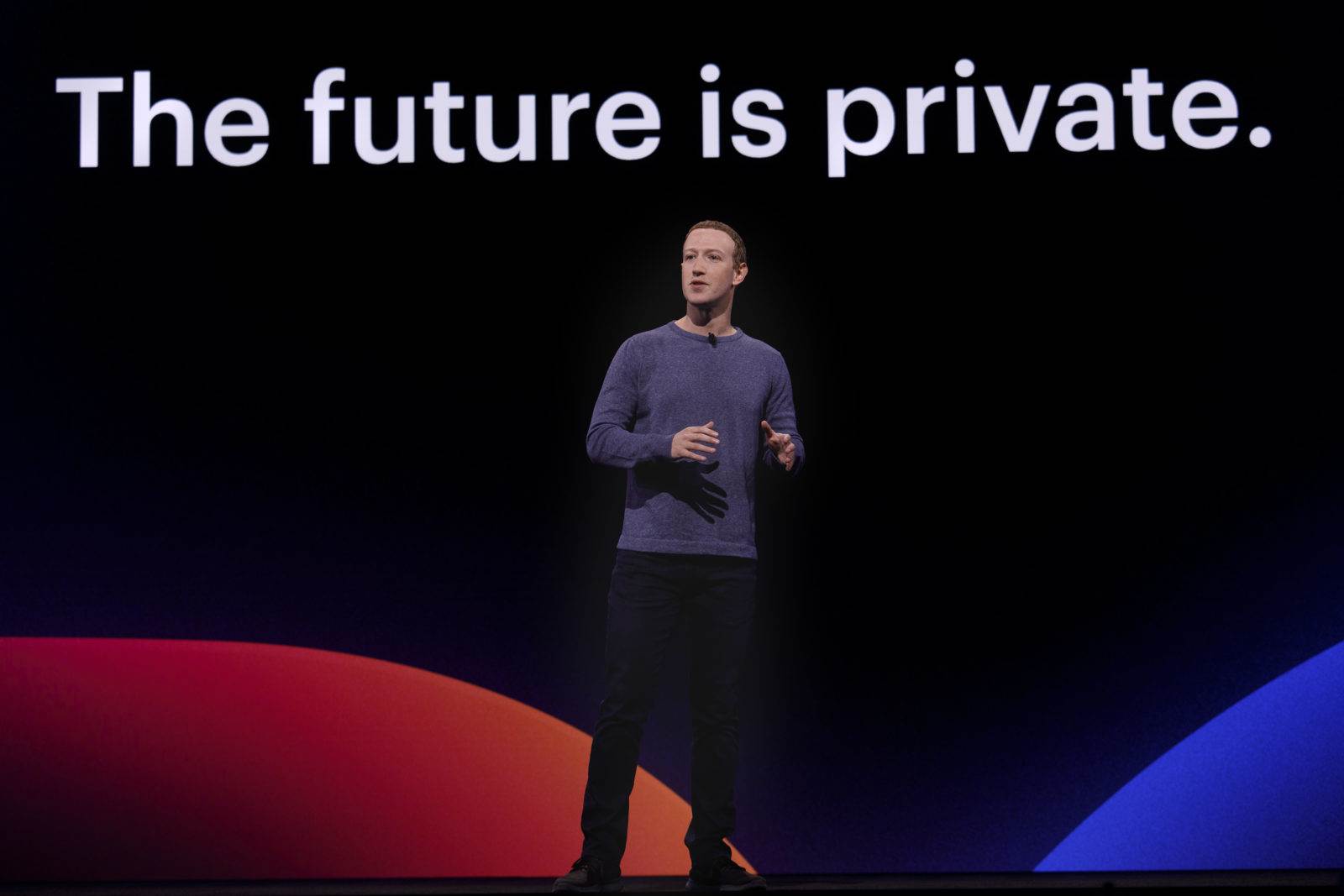 Another exciting new feature is Facebook’s ability to privately message any of your contacts, via any of Facebook’s platforms. That means that you could potentially Instagram DM a friend via Facebook Messenger, or post to a Facebook Group with Whatsapp!

While there was no official launch date announced for these features at F8, Zuckerburg made it clear that improvements to users privacy is front of mind, and we’d start to see these big changes in the coming year!

Get ready for some big aesthetic changes at Facebook!

Firstly, the company’s “big blue” app is undergoing a full redesign — soon the iconic blue logo will be updated to include a sleek white trim, and the blue border along the top of the desktop page screen is also having a revamp.

Plus, the new design will give prime “app real estate” to features like Groups and private messaging.

That means that communities and Group pages are going to be more prominent in the app, making it easier to post and engage with others in your network. 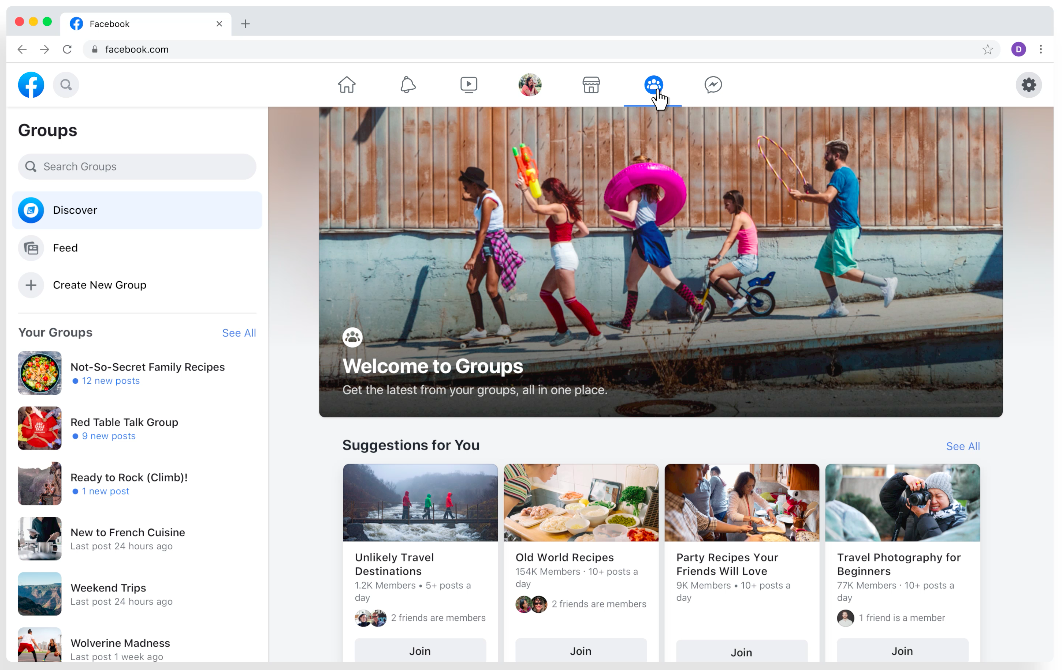 For businesses, this is big news — while it might impact engagement on Business’s Facebook Page, it may open up the opportunity to organically grow and expand your audience with a Facebook Group instead.

Overall, we can look forward to a much cleaner design from Facebook, with a simpler and more streamlined way to navigate from your feed, to your private messages, to your Groups.

It’s the first major Facebook redesign in five years, and while an exact date for the web redesign wasn’t announced during the keynote speech, the new and improved mobile app has already launched!

Smaller and faster — that’s the aim for the Messenger app’s new upgrade.

And aesthetically, we can expect to see your friends’ Facebook Stories being prioritized in the app design, making it a place to share time-sensitive and private posts, similar to Instagram Stories’ Close Friends feature, or Snapchat’s direct messaging!

Plus, more social features are coming to the Messenger app too — Facebook is currently testing a feature where you can opt to watch Facebook videos with your Messenger friends at the same time. 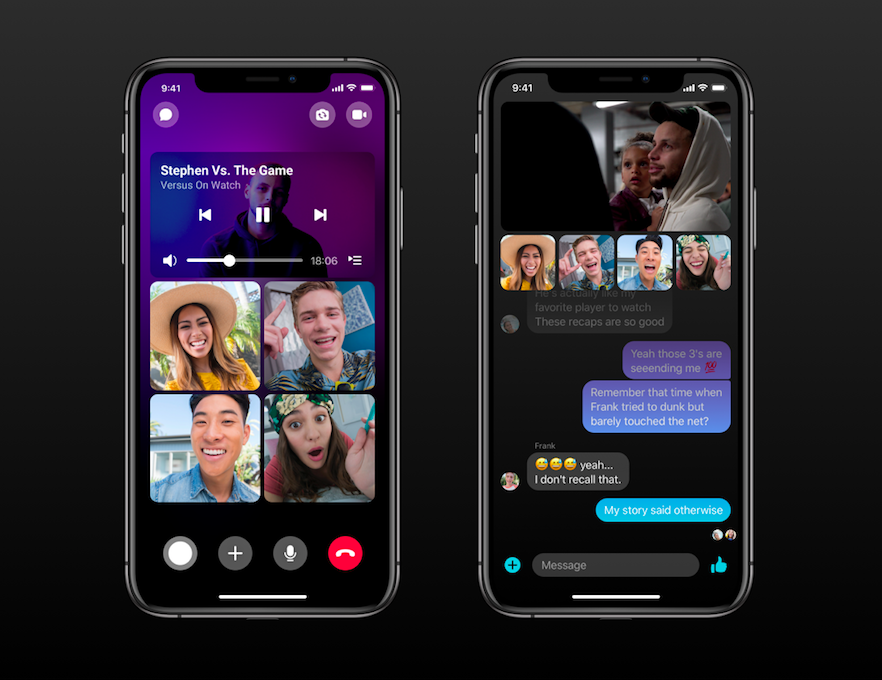 Messenger will also have a stand-alone desktop app that will allow people to message each other, and even message between Facebook’s various apps — like Instagram and Whatsapp!

This could be a real game-changer for private messaging — one unified platform to manage all your DMs, from your laptop, could be the answer we all need in our business and social lives! 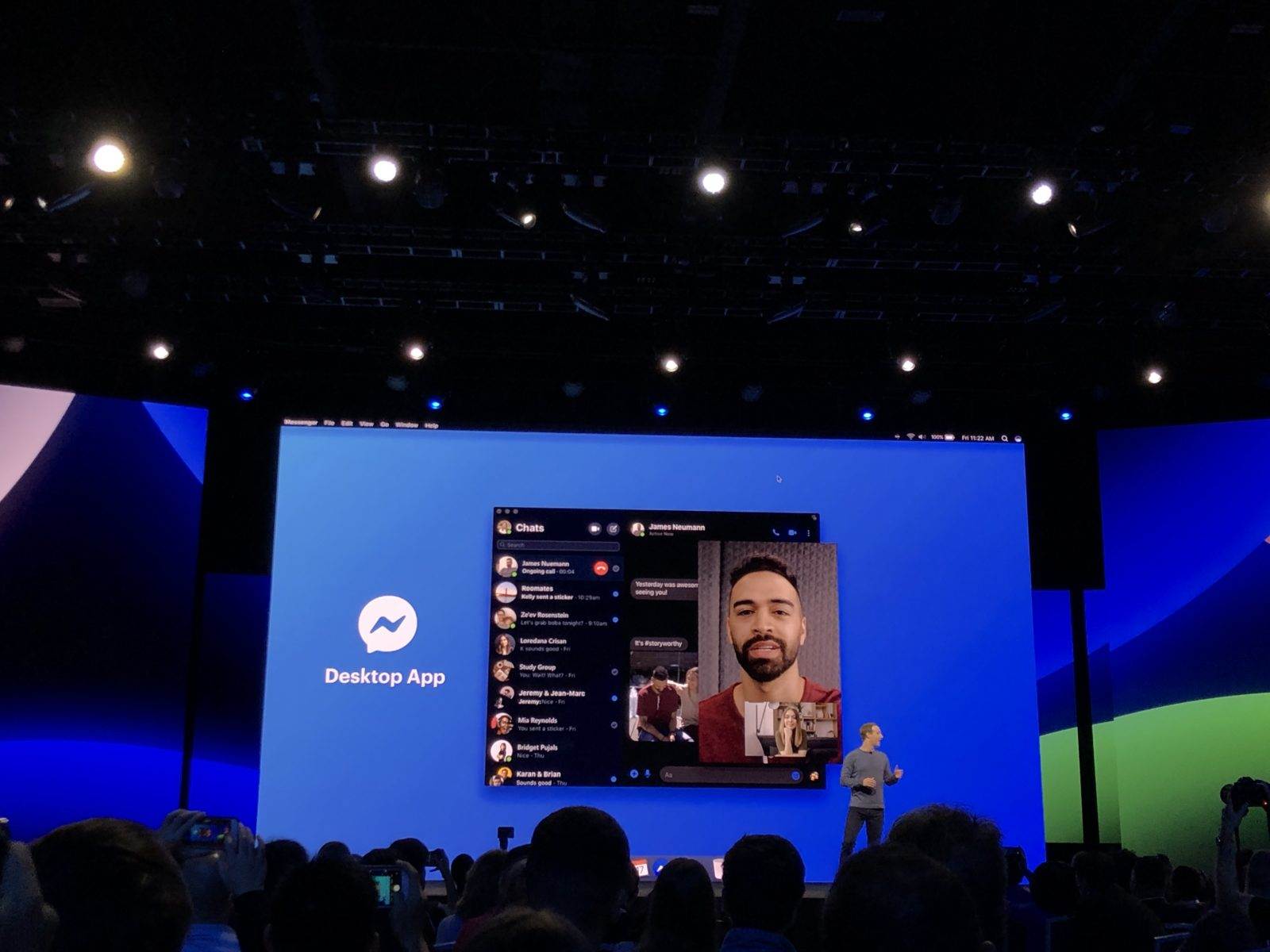 For the millions of businesses who rely on Facebook to engage with their social community and market their product online, these improvements could make a real difference!

In terms of spec, the new powered-up version of the Messenger app is touted to be 7x smaller and twice as fast as some of the other leading chat apps in the market. Plus with a nickname of “Lightspeed”, the newest version of the app weighs in at less than 30 megabytes, plus has a cold-start time of 1.3 seconds.

While it’s all in testing stages, Facebook revealed that we can expect the new, super-powered and super-social version of Messenger coming later this year.

The big focus at this year’s F8 keynote’s speech was community — and Zuckerberg made it clear that the business is going to focus on building both public and private communities online.

As Zuckerburg mentioned, our digital lives need both a public and private space. This means users are turning to Facebook Groups and closed communities to post and share details of their life to an audience that they know will be engaged and interested on the topic, just as much as they are.

From travel, gaming, parenting, gardening, the topics on which Groups are forms are endless, and offer a real online community space for businesses. 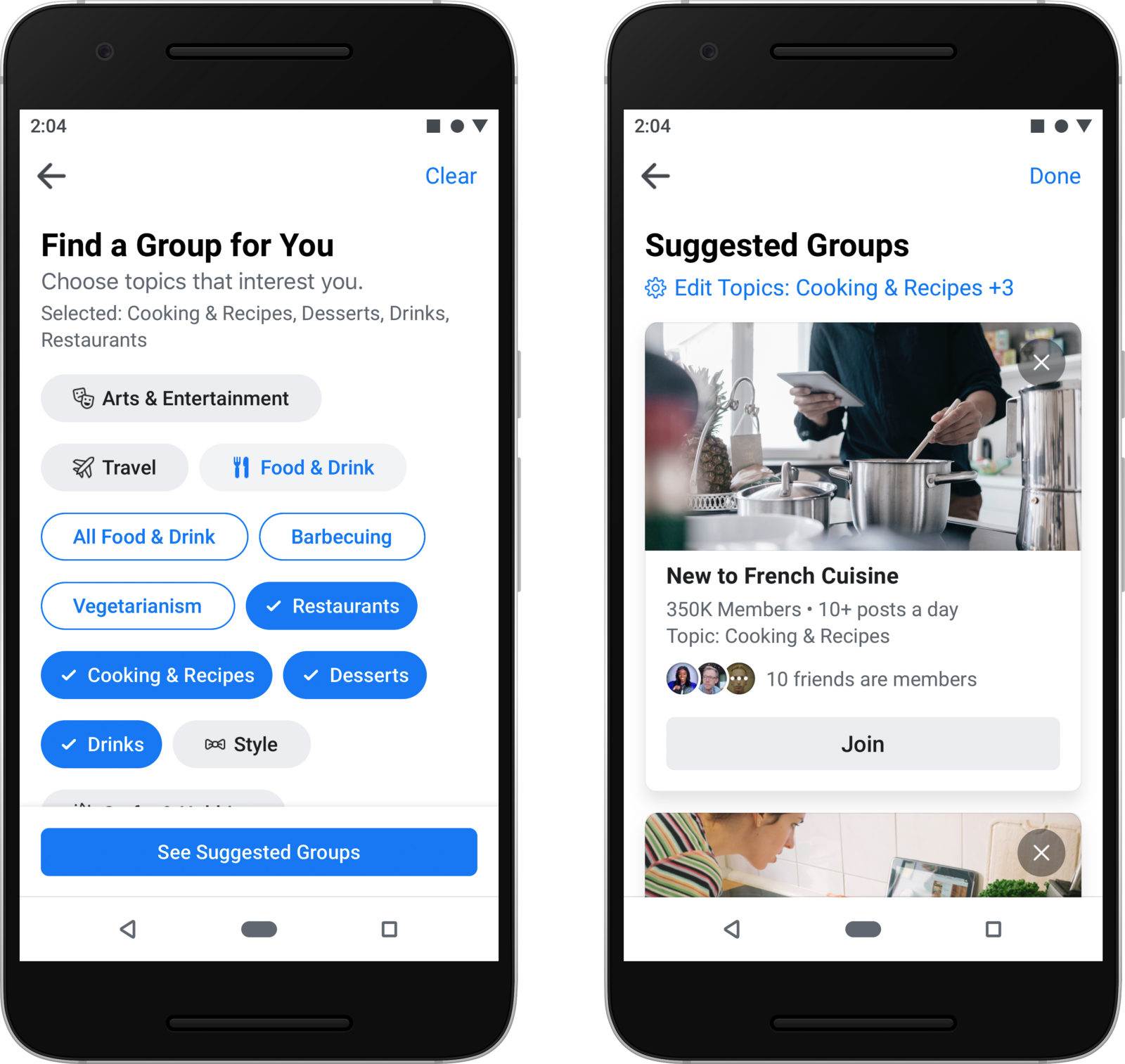 Plus, look out for more Group recommendations across the app — when Facebook suggests a new Group for you to check out, it will be more relevant to you and how you’re engaging on Facebook.

Similarly, businesses are using Facebook Groups to engage with their customers and followers and it offers up another platform to engage and communicate with the fans in a semi-private (as Groups usually require an admin invite or acceptance form) space.

So with this in mind, we can expect to see some changes around how Facebook Groups are presented, and how we’ll find and engage in them. 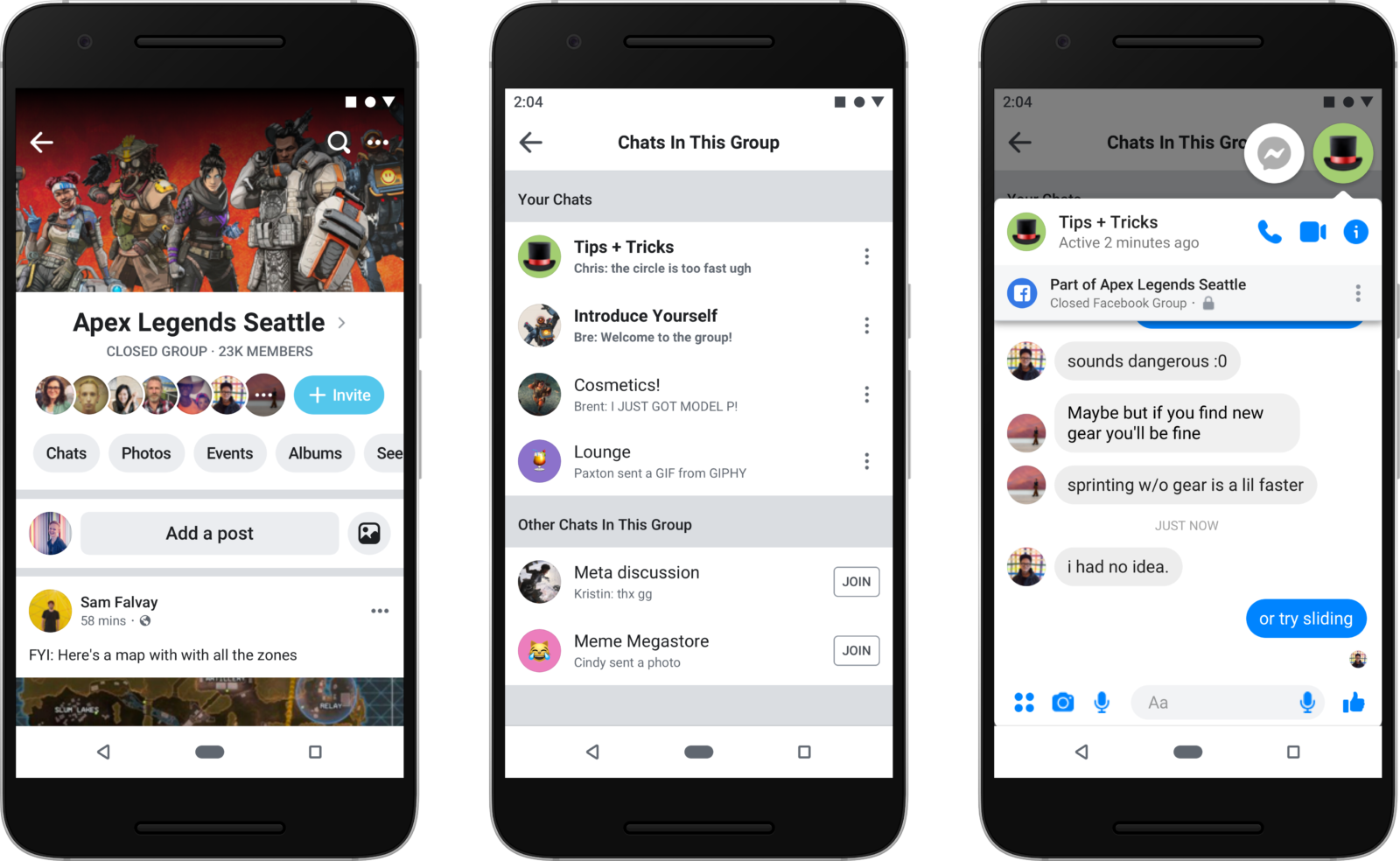 There are already tens of millions of active Groups on Facebook, so the new app and desktop redesign will make Groups easier to find, thanks to a new revamped Groups tab. Here you’ll be able to find a personalized feed with all the updates from your Groups in one place.

This means you’ll easily be able to separate your Group posts with your personal News Feed posts and hopefully, engage more with both in a streamlined way.

And with the new ability to easily share News Feed posts with your public and private groups, you might find it easier to post and engage with your Group feeds. 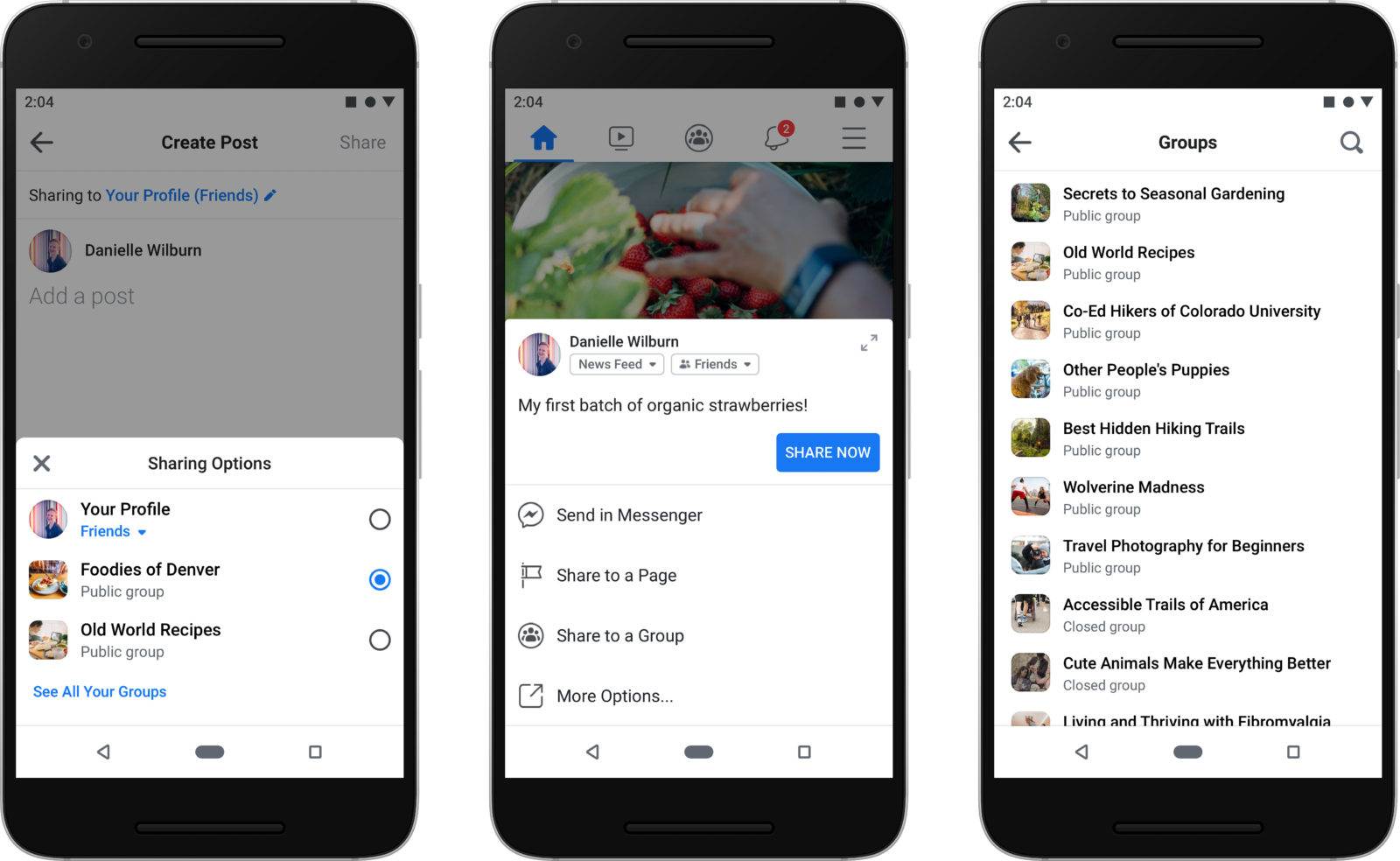 There’s no denying that Facebook’s big announcement at F8 for greater privacy and greater community features were welcome changes!

For businesses, the changes offers a huge opportunity to organically grow your audience with Facebook Groups, and build a community of engaged followers online.

Facebook is offering up a safer online experience for everyone, and with a sleek upgraded design and new community-driven features, this year might deliver a welcome boost in engagement and active conversations online. Watch this space!