In Friday’s volatile trade, the domestic equity market attempted to stabilise, as it halted its decline near the confluence of two pattern supports, and the 50-DMA which currently stands at 10,646. The market saw a positive start, but soon lost ground to slip into the negative territory. Thereafter, the market spent much of the session oscillating within a defined range.

In the last hour-and-a-half of trade, Nifty pulled back once again to end near the high point of the day and settle 55.10 points, or 0.52 per cent, higher.

A positive start is expected on Monday. We are likely to see the market continue with the pullback witnessed in the last hour of the trade on Friday. The broader market had outperformed in the previous session, and this has kept the market breadth favourable. We will also have positive clues from Friday’s rally in US stock to aid a positive start to Monday’s trade. The 10,787 and 10,865 levels are likely to act as immediate resistance for Nifty while supports may come in at 10,680 and 10,630 levels. 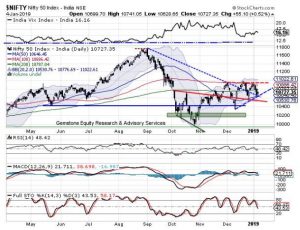 he Relative Strength Index (RSI) on the daily chart stood at 48.4168. It remains neutral and shows no divergence against the price. The daily MACD is bearish as it trades below its signal line. On the candles, Nifty is seen holding on to its 50-DMA and to the confluence area of two pattern supports.

The 50-pack did not do much to gain some ground in Friday’s trade, and it remains trapped in a range. For Friday’s pullback to result in a sustainable breakout, Nifty still must move past its 200-DMA and 100-DMA, which have almost become a proxy trend line for the index. However, with Nifty taking support at its 50-DMA, we can expect the market to inch higher. Traders should avoid shorts but can make select purchases. Stock-specific out-performances can be expected from favourably rotating sectors like PSU banks, consumption, infrastructure and realty.