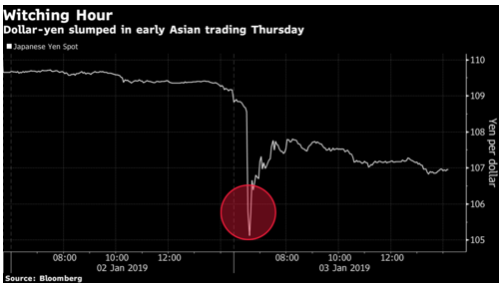 It took seven minutes for the yen to surge through levels that have held through almost a decade.

In those wild minutes from about 9:30 a.m. Sydney, the yen jumped almost 8 per cent against the Australian dollar to its strongest since 2009, and surged 10 per cent versus the Turkish lira. The Japanese currency rose at least 1 per cent versus all its Group-of-10 peers, bursting through the 72 per Aussie level that has held through a trade war, a stock rout, Italy’s budget dispute and Federal Reserve rate hikes.

Traders across Asia are still seeking to piece together what happened in those minutes when orders flooded in to sell Australia’s dollar and Turkey’s lira against the yen. While some pointed to risk aversion triggered by Apple Inc. cutting its sales outlook, others said Japanese retail investors were bailing out of loss-making positions. Whatever the cause, the moves were exacerbated by algorithmic programs and thin liquidity with Japan on holiday.

“The moves were very violent,” said Stephen Miller, an adviser at Grant Samuel Funds Management Pty in Sydney and former head of fixed income at BlackRock Investment Management (Australia). “It would have caught some by big surprise.” 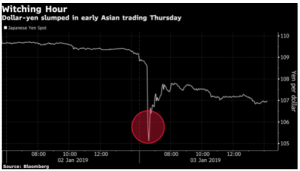 With Japan on a four-day holiday this week, traders said they struggled to handle a flood of sell orders with pricing erratic. Once the yen strengthened past 105.50 against the dollar, others were forced to cover their short yen positions, said traders who asked not to be identified as they aren’t permitted to speak publicly.

“It looks more like a liquidity event with the move happening in the gap between the New York handover to Asia,” said Damien Loh, chief investment officer of hedge fund Ensemble Capital Pte., in Singapore. “It was exacerbated by a Japan holiday and retail stops getting filled on the way down especially in yen crosses.”

As a result, the yen surged against every currency tracked by Bloomberg.

The haven asset has strengthened against all its major counterparts over the past 12 months as concerns over global economic growth mounted and stocks tumbled. It rose 2.7 per cent against the dollar last year, the only G-10 currency to gain versus the greenback.

That hasn’t stopped investors in Japan from piling into foreign currencies as the central bank’s negative-interest-rate policy made the yen a source of cheap funding. Individuals boosted their net Aussie long positions by 45 per cent in the two weeks through Dec. 18, according to the latest data from Tokyo Financial Exchange Inc. These retail accounts’ net Turkish lira long positions were also at a four-month high.

These investors may have been forced to exit positions after the yen advanced almost 1 per cent against the dollar on Wednesday, according to Ray Attrill, head of FX strategy at National Australia Bank Ltd. in Sydney.

“We can only speculate on whether the behavior of Japanese retail FX accounts, suffering further losses on short yen positions overnight and being forced to exit, was an initial catalyst for the scale of the moves,” he said.

Flash crashes have happened before in early Asian trading when liquidity is thin. The pound plunged 6 per cent in two minutes on Oct. 7, 2016 amid concerns over Brexit and speculation of a “fat finger.” Thursday’s wild moves started around an hour after Apple cut its fiscal first-quarter revenue, with Chief Executive Tim Cook saying they were surprised by the magnitude of the slowdown in the Greater China region.

That added to already fragile sentiment in a week when manufacturing gauges across the world’s biggest economies all stumbled, with a Chinese indicator signaling contraction for the first time in more than two years. Factory growth in the euro area fell to the lowest in almost three years

While Thursday’s sudden market turmoil came as a surprise, the fact the yen strengthened wasn’t itself unexpected, traders said. With the US and China embroiled in a trade war and stocks sliding, Japan’s currency may be set to repeat last year’s strong gains, they said.