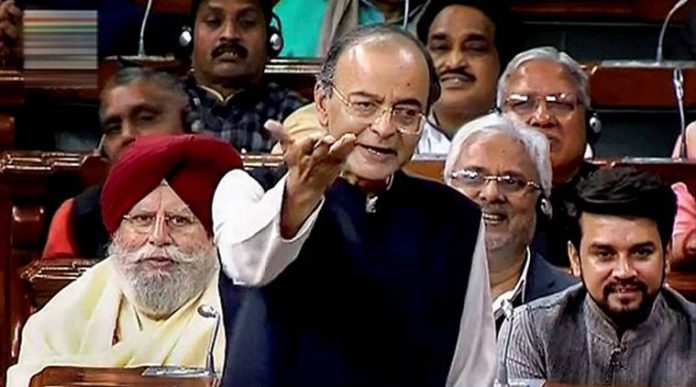 Investors looking to the US government for signs of stability instead got further unnerved with President Donald Trump blasting the Federal Reserve, blaming it for the three-month equity rout in a Twitter post on Monday after stock markets ended trading in Mumbai. Stock exchanges were closed on Tuesday for Christmas in India, Europe and the US.

The Nikkei 225 Stock Average slid into a bear market on Tuesday, as a global equity rout continued unabated in the last week of the year.

The Japanese benchmark fell 5% on Tuesday, widening its drop to 21% from its 2 October peak, as it took cues from the S&P 500’s worst trading session before the Christmas holiday. 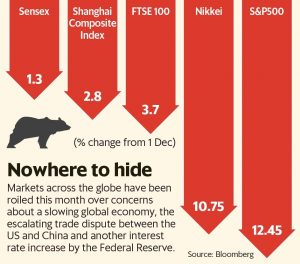 Chinese shares, the other major Asian market open on Tuesday, also declined as investors shrugged off a pledge by the government to do more to support companies.

Meanwhile, concerns related to fiscal slippage in India coupled with global worries have already dented investor sentiment in the country, making it the worst December for the Sensex in the past four years. The index has slipped 2% this month.

There is a high likelihood that ripple effects of the turbulence that struck the US markets will be felt across markets worldwide, said Ajay Bodke, chief executive and chief portfolio manager (PMS) of broking firm Prabhudas Lilladher.

“No market is expected to be immune from ripple effects of the sharp drawdown seen in global markets. What has taken everyone by surprise is the ferocity of the fall in such a short period. The extent of impact on various markets will vary,” Bodke said.

However, he added that India may be better off because fears of a slowdown in global economic growth may result in global crude prices declining further, which is good news for a large importer like India and may improve macro-economic parameters of the country. Low crude oil prices will also help the local currency, he added.

Foreign institutional investors (FIIs) have sold Indian shares worth $4.46 billion so far in 2018, the most in a decade. Domestic Institutional Investors (DIIs), including mutual funds and insurance companies, have invested a record ₹1.09 trillion in local equities this year.

Deepak Jasani, head of retail research, HDFC Securities, however, said that the tussle between Trump and the Fed is unlikely to directly impact India.

“Hence, our markets on Wednesday may not see a fall equal to the US market fall seen on Monday. Now, the US markets are close to being over-sold which is why we may see a bounce there within the next few days. Following that, Indian markets may see a positive effect,” Jasani said.

The tumult in Washington added to the concerns of investors, who have seen equities worldwide tumble over concerns of a slowing US economy, the pace of rate hikes by the Federal Reserve and the ongoing trade war. The S&P 500 plunged almost 3% to end at a 20-month low on Monday.

The Federal Reserve hiked interest rates four times in 2018, the last one was announced in December. The US central bank, however, has forecast fewer rate hikes next year and signalled its tightening cycle is nearing an end in the face of financial market volatility and slowing global growth.

“The Trump bubble, which had brought gains in US stocks and the dollar, is collapsing,” said Mitsushige Akino, an executive officer at Ichiyoshi Asset Management Co. in Tokyo. “The more stocks fall, the more investor sentiment gets worse, so there’s more people who need to sell temporarily, such as stop-loss selling.”