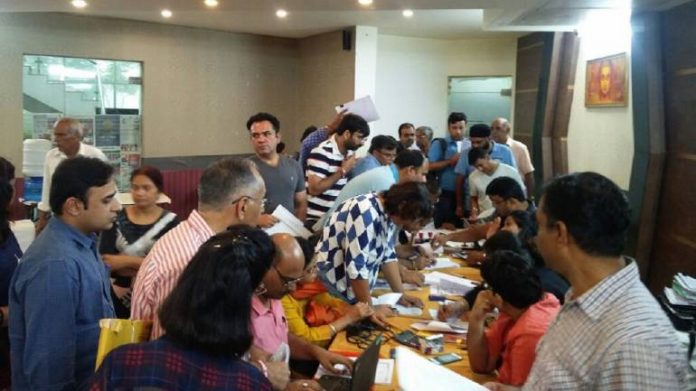 The Supreme Court on Wednesday warned the Amrapali group, that it would sell ‘each and every property’ of the embattled firm and make it ‘homeless’ to recover the cost of unfinished projects if the firm failed to raise Rs 5112 crore to complete them. The case will be next heard on September 15.

Last week, the court had slammed the Amrapali group for playing “fraud” and “dirty games” with the court and ordered attachment of all the bank accounts and movable properties of 40 firms of the realty firm. It had also directed the company to place before it details of all bank accounts from 2008 till today and ordered freezing of bank accounts of all the directors of its 40 firms, besides attaching their personal properties.

“The real problem is that you have delayed giving possession of homes. Don’t try to play smart or we will sell every inch of your property and render you homeless,” the bench said, adding “homebuyers will not pay even one more penny.”

The bench of Justices Arun Mishra and U U Lalit asked the group to submit a valuation report of movable and immovable properties of its managing director and directors within 15 days. It has also sought details of its serving directors and those who have left the Amrapali group since 2008, lawyers present at the hearing said.

The bench also asked the firm to file a detailed proposal on how it plans to raise Rs 5112 crore to ensure there are enough funds to enable NBCC to complete the delayed housing projects, advocate Kumar Mihir told Moneycontrol.

The court will vet the proposal at the next hearing.

The resolution professionals for Amrapali Silicon City, Zodiac projects (A category A) projects in Noida have been removed, lawyers present at the hearing said.

It also sought the details of companies that were looking after the maintenance of Amrapali projects and the funds they have collected and disbursed so far.

The top court also asked the power companies in Noida to restore the electricity at two projects of the group which had been disconnected owing to arrears. Amrapali has been directed to clear all dues to the electricity board, lawyers said.

The National Buildings Construction Corporation (NBCC) India Ltd had on August 2 told the Supreme Court it was ready to undertake the projects of the Amrapali group of companies, which has failed to hand over possession of flats to around 42,000 home buyers.

The bench had asked the NBCC to place before it a “concrete proposal” in this regard in 30 days on how they proposed to complete the projects, along with a time line of work. The next date of hearing for considering NBCC’s proposal has been set for September 4.

“NBCC has been directed to construct the unfinished units and give a report within 30 days on how they propose to construct the units along with the timelines and the amount that will be required to complete them,” advocate Mihir said.

At an earlier hearing on May 17, the apex court had given the go ahead to three co-developers to complete the stalled projects. It had also asked the Amrapali group to deposit Rs 250 crore in four weeks in an escrow account that will be have to paid to co-developers on completion of the projects. These co-developers included Noida-based Galaxy Group, IIFL-Viridian consortium and Kanodia Cement. The May 17 order was recalled at the last hearing on August 2.

The Supreme Court on August 1 had ordered attachment of the properties and bank accounts of all the directors of Amrapali’s 40 firms. It hadd rapped state-owned National Buildings Construction Corporation (NBCC) for publicly offering to complete Amrapali’s projects when the apex court was hearing the matter and a verdict was still awaited.

The secretary of ministry of housing and urban affairs and chairman and managing director of NBCC had to personally appear before the court on August 2 on the matter.

At last week’s hearing, the court had also taken note of the alleged diversion of Rs 2,765 crore by the Amrapali group and asked the auditor to submit a report on it. The apex court directed the statutory auditors of Amrapali Group Anil, Ajay and Company, to examine accounts of all 40 companies of the group and file the report on whether the company had indeed diverted the amount collected from homebuyers.

“If you have diverted money, we will squeeze every asset and bring back every money you have diverted, including compensation that you may have to pay to the buyers for delay,” the bench comprising justices Arun Mishra and U U Lalit had told the builder.

The Supreme Court on Wednesday had also noted that diversion of funds collected from investors by real estate developers was a “malady” and it wanted to stop this “nonsense” once and for all. The apex court observed that if builders were diverting money invested by a person in a particular housing or commercial project to complete other projects, it, prima facie, amounted to misappropriation and criminal breach of trust.

The bench wondered as to how Rs 2,765 crore fund was allegedly diverted by the Amrapali Group for carrying out works in its other projects.

“How can they (chartered accountants) allow siphoning of money like this,” the bench said, adding “money given by the investor to complete a particular project cannot be used for other projects as it amounts to criminal misappropriation.”

“This (diversion of funds) is the malady which is affecting all the builders. We want to stop this nonsense once and for all,” the bench said.

Referring to the issue of diversion of funds, the bench told the counsel appearing for the Amrapali Group, “Stand on your legs and not on the shoulder of investors.”

Last month, Amrapali group had informed the Supreme Court that it has submitted the proposal for construction of its unsold projects by the National Buildings Construction Corporation (NBCC) to the high-powered monitoring committee set up by the central government to look into delayed projects in Noida.

NBCC sources had told Moneycontrol that at the high-powered monitoring committee meeting held last month, the ministry had requested NBCC to look into the viability of the proposal. “The proposal needs to be vetted and due diligence of Amrapali’s properties also needs to be carried out. We may even decide to come up with a counter proposal,” sources had said.

NBCC, if it decides to take over the projects, will manage it as a project management consultant (PMC) to ensure that completed houses are handed over to homebuyers and there is no diversion of money. For the purpose an agreement may have to be entered between NBCC, Noida Authority and the Amrapali group so as to manage the projects as a PMC, sources had said.

If an agreement is signed with Amrapali, it will continue to remain the promoter and will be responsible for any litigations concerning the projects. The embattled firm may even be asked to deposit its unsold inventory with NBCC which may be mortgaged to raise the PMC’s fees, sources had said.

“If NBCC decides to manage the project, initial funding may come in through a financial institution after mortgaging Amrapali’s unsold land. As PMC we will have to ensure quality of construction through the contractor and we will deposit the realization in an escrow account,” NBCC sources had said.