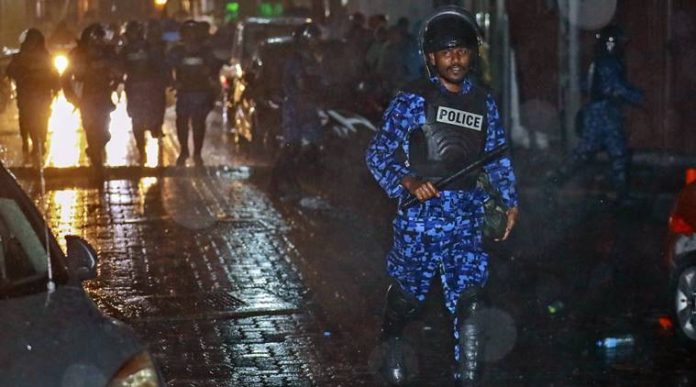 The US on Tuesday commenting on the ongoing political chaos in the island nation said that it was ‘troubled and disappointed’ and has asked President Yameen to implement the Supreme Court ruling.

As political crisis deepens in the Maldives, President Abdulla Yameen on Tuesday stated that the emergency decree is to investigate the plot and coup behind the Supreme Court ruling, news agency AP reported. In an address to the country on national television the President said, “This is not a state of war, epidemic or natural disaster. This is something more dangerous. This is an obstruction of the very ability of the state to function.”

The crisis had worsened Monday when President Yameen declared a state of emergency and, within hours of the emergency declaration, two top judges, Chief Justice Abdulla Saeed and another judge, Ali Hameed, were arrested.

Earlier on Tuesday, exiled former President Mohamed Nasheed sought for India’s diplomatic and military intervention to resolve the ongoing issue. Nasheed, the president of Maldivian Democratic Party (MDP), which functions from Colombo, appealed for help from India. A statement issued by the party in Colombo said, “We would like the Indian government to send an envoy, backed by its military, to free the judges and the political detainees, including former President Maumoon Abdul Gayoom, from their detention and to bring them to their homes. We are asking for a physical presence.”

Stating the martial law as illegal, Nasheed was quoted by PTI as saying: “President Yameen’s announcement — which declares a state of emergency, the banning of fundamental freedoms, and the suspension of the Supreme Court — is tantamount to a declaration of martial law in the Maldives. This declaration is unconstitutional and illegal. Nobody in the Maldives is required to, nor should, follow this unlawful order.”

Urging the US to stop all transactions of the Yameen regime’s leaders, the exiled leader added, “We must remove him from power. The people of the Maldives have a legitimate request to world governments, especially to India and the United States.”

Expressing concerns over Yameen’s delay in implementing the Supreme Court ruling to immediately release political prisoners, Nasheed had earlier said, “This deliberate refusal by the government to uphold the Constitution further destabilises the Maldives and wider Indian Ocean security.”

Meanwhile, the US on Tuesday commenting on the ongoing political chaos in the island nation said that it was ‘troubled and disappointed’ and has asked President Yameen to implement the Supreme Court ruling. A report in PTI quoted State Department spokesperson Heather Nauert saying, “The US is troubled and disappointed by reports that Maldivian President Yameen has declared a state of emergency.”